While I remember, flatmate V works for the fabulous Kabiri who are running a competion here, all you have to do to win one of the fab Metalskin bracelets that I totally love (damn me not being eligible because I live with V) is comment on the Facebook photo album! Good luck….

Today I have pulled this little lot out of my wardrobe…. 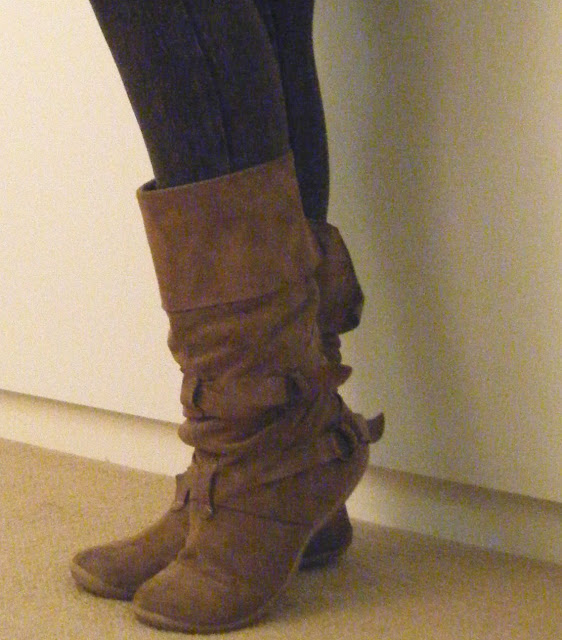 I love this comfy tee, jeans and slouchy boot look especially when I only have to walk 10 minutes up our road to get to work where I immediately get changed into whatever outfit/costume I’ve decided to wear that night. This weather is particularly hard to dress for as it seems a little silly to be putting on loads of layers only to have to take them all off again for a few hours at work to then have to put them all back on again for the walk home. I do however need to find a happy medium between this look and my more dressed up outfits because it is starting to annoy me that I never use more than half my wardrobe!

I’m still waiting to hear about the job interview I went for a few weeks back, I had my interview on the day I put up my first post on this blog nearly four weeks ago! The lady who interviewed me had said I would hear from her in about two weeks so when that deadline came and went I decided to give her a call to see if any decisions had been made. They are still thinking about candidates and who to put forward to the next round of interviews!! Fingers crossed please, although with the length of time this is taking you might end up with cramp in said fingers…

Slightly annoyed that Ikea have just texted me to say that my new desk now won’t be delivered until the 18th November instead of this Thursday as they had originally planned, grrr argh!  I guess this means I have another week of leisure before the studying starts though, silver linings and all that!

So the online dating story seemed to go down well, here’s another one…

A rather nice chap on MSF started emailing me, he seemed cute and witty so we decided to go out for a few drinks. We were getting on like a house on fire and he’s quite a hottie so again I started thinking “ooooo mmmm geeee” second time lucky maybe! We’d been chatting for a few hours when friends starting coming into the conversation, I mentioned my bestie Tatty who happens to live in Ipswich (somewhere I used to live for about 6 years before I moved to London), my date piped up with “but I’m from Ipswich!”, small world thinks I. We start talking about the different bars, clubs and restaurants we liked while we were living there and we went to a lot of the same places it seems, so we then start talking about people who used to hang out in those places. It got to the point that we started asking if we knew each others friends…..turns out he was The Chefs (my boyfriend when I was 17) best friend! We had not only met before but hung out quite a few times (The Chef and I dated for 7 months!) ten years previously!! In our defence we both looked totally different now, it had been ten years after all! Scarily small world, with all the people on MSF for us to both decide that we’d like to meet each other, there must be pretty small odds on that actually happening?! Obviously we reminisced for a while but we both agreed that this was far too weird and went our seperate ways…