I‘ve managed to totally kill my iphone headphones, I don’t think they were designed to be slept in (I listen to audio books while I sleep, a bad habit I picked up a few years back)! This is really annoying as I use the hands free thingy to answer and make all my calls, especially in this weather! I’ve just walked down to the Apple Store on Regent Street to get a new set and I also want to swap my sim card over, apparently I’m going to lose all my text messages which is bad but in a way good because it’ll stop me getting nostalgic which I am prone to do.

I really hate Oxford Street at this time of year and it’s only going to get worse! I have a pet hate of people who walk along really slowly then stop in the middle of the street for no reason at all or people who stop at the top or bottom of escalators! Why do that? Surely they are aware that there is a whole host of people behind them and they are creating a bottle neck! Grrr!

Today I have put this little lot on….. 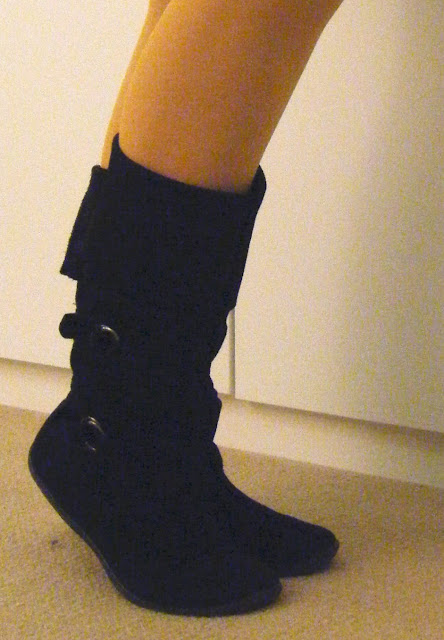 I love this hat although I do get looked at an awful lot whilst wearing it and sometimes meowed at! It was a present from TG Guy (Top Gear Guy) I think it was a present just because and for nothing in particular which was very sweet of him. I’m not sure about the tights though I’m either loving them or I look like I have jaundice!

Todays dating disaster was this experience….A rather nice fella, let’s call him Clingy, had been emailing on MSF and again he seemed charming, witty and looked very cute in his pictures. Now after my first dating disaster I had decided to try and agree to a date fairly early on rather than exchanging loads of emails, texts and long MSN conversations. So Clingy and I arranged to meet for an early dinner (rookie mistake! Never arrange a dinner date for the first meeting always go for “drinks” which you can excuse yourself from if the date is awful or you can always suggest “a bite to eat” if it’s going really well) in Jerusalem. I arrived and he was there waiting for me at the table, not quite as cute in real life as in his pictures (we all put up the pictures we think we look best in, so no worries there) but I was still happy. We ordered some drinks and food and had been chatting for about ten minutes when Clingy blurts out “I really like you, I’ve got four other dates lined up for this week (it was Tuesday night) but I’m going to cancel them all as I think you’re The One!” Oooooo Mmmmmm Geeeeee and not in a good way! Now I think that I’m a lovely person (my friends tell me so at least!) and I’ve also been told I’m a good conversationalist but that after TEN minutes! WOW! I kinda stammered “thank you but….” and he proceeded to talk over me telling me why this would be a good thing and how we were obviously meant for each other! I remember the rest of the dinner being really awkward (love that word, not trying to spell it) and me excusing myself as early as possible. Trouble is it turns out that Clingy’s best friend lived on the square I also lived on, which is one of the smallest in London so we ended up bumping into each other all the time. Clingy chose not to say anything which was great of him until the time he bumped into me and The Stoner (he’s another story)  in a bar just round the corner, Clingy decides this is a great time to again announce, infront of The Stoner too, that we were meant for each other and we should go out again! Nervous laughter and a few awkward looks and Clingy left the bar. Now I am looking for happily ever after and I do want to meet someone that wants that too (such an issue it turns out!) but I would also like to get to know that someone for longer than ten minutes before we decide to run off together into the sunset, call me crazy!