So tonight I’m off to a black tie boxing night for the British Legion of all things! I’ve been told I don’t have to wear black this evening which is very exciting because I own very few black clothes and only have two “cocktail” looks in black which I’m getting quite bored with! I’ve decided to wear this ensemble…. 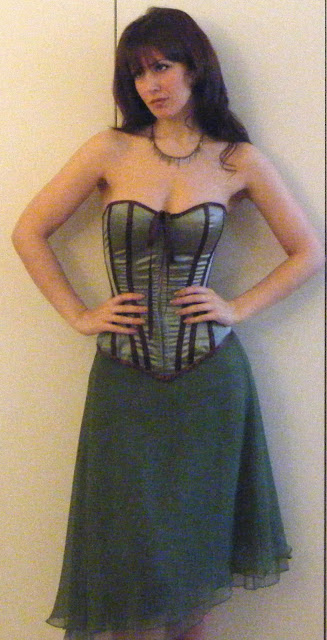 I love these Kookai corsets, I have five! I’m a sucker for this, if I find something that I like and I think suits me I’ll buy it in every colour I can get my hands on. I think the largest collection I have like this is my All Saints Russian Doll skirt collection, I have close to about twenty of these which, even for me, is a little excessive. I also have the Office shoes I’m wearing today in about six different colours……hmmmm I think I have a problem!

Todays dating disaster is …… Scary Dude! I met Scary Dude on MSF he started emailing me and was very funny and liked the sci-fi thing, his profile was well written and he didn”t seem to take himself to seriously. He only had up a few photos and these were mainly head shots but he was very cute and I knew no better….. We chatted on MSN for a while and he was very persistant about asking me where exactly I worked. Now I’m an ecdysiast and had said so on my profile as I didn’t want to mislead anyone. Scary Dude really wanted to know which club in particular I worked in, something that I had wanted to tell people in person as there are some people who jump to consclusions or have preconceived ideas about what I do, he had asked in so many ways that I would have had to lie or totally ignore the question so I told him. Whoops.

We had agreed to meet for lunch (I work nights, so evening dates were a little difficult) and when I turned up it became apparent that the photos Scary Dude had used on MSF were about five years old or head shots because he was quite a bit (a lot) chubbier than he’d stated. He was still cute but not really my type and if he’d been honest with his description and photos I probably wouldn’t have met him. Call me shallow if you want but you can’t help who you are attracted to.

The first thing Scary Dude said to me as I sat down and after “Hello” was, and I quote, “You have wonky front teeth! My best friend is a private dentist and going through a messy divorce, I told him what you did for a living and he said “don’t f**k it up and offer free dental treatments to her in exchange for her setting me up with her mates” so I can get your teeth fixed if you know anyone that wants to date my friend!”. Scary Dude said all this with a huge smile on his face like I was going to be over the moon with his offer/suggestion! Now I do have a wonky front tooth but I quite like it, it’s not so bad and adds character or so my Mum tells me! I smiled politely and wondered how the hell I was going to get out of there! This is when I decided that from then on I would arrange with a friend for the “emergency” text about half an hour in to any date I went on from that day forth. Unfortunately I hadn’t developed this online dating survival tip yet so I thought “well his emails were funny so lunch won’t be that bad” oh how wrong I was! Scary Dude was a nightmare, he’d decided that I would be fun to date for a while and was flashing the cash and dropping glaringly obvious “I’m loaded” hints in to his conversation because he thought that was the way to attract someone who does what I do for a living (he made it obvious that was what he thought the whole time I was there!).

Lunch lasted an hour and I paid for my half (didn’t want to owe him anything!) and excused myself sharpish breathing a sigh of relief that that was over…. A few days later Scary Dude texted me at about 2am on a Friday morning, now I am a night owl and I am almost always awake at that time but for someone who I barely knew to text at that time I thought was quite rude, how was he to know these things about me? I hadn’t told him! The text was very drunken, he was on a stag do in Poland, and asking what I was up to and if I fancied meeting up again? I didn’t reply for a number of reasons; I wasn’t interested, it was 2am in the morning and I had no clue what to say. About 20 minutes later I got another text demanding to know why I wasn’t replying, he knew that I was getting his texts and I was online (I wasn’t) how dare I not reply! I turned my phone off, got on to MSF and MSN to block him and went to sleep thinking “weirdo”!

A few weeks later I got an email on MSF from a cute guy who was really charming and very funny, we exchanged emails back and forth for a few days and finally agreed to meet for Sunday lunch that weekend (I don’t have much luck with Sunday lunch dates so I?!). It got to Sunday and I received an email confession saying “Hi, I thought I ought to tell you before we met today that it’s actually Scary Guy (he used his name obvs)! I was really sorry about the texts and wanted to see you again. Hopefully you’ll still want to meet up?” Oooooo Mmmmm Geeeee! I blocked this new profile (yup he’d set up a whole new profile and nicked some poor guys pictures! New phone number too.) and sent an email to MSF about this very strange guy so he was then their problem!

A few weeks later Scary Dude walked into the club I work in, he’d come in to see me and explain! At this point you have to ask yourself “really!?” thankfully the club I work in has excellent door staff and management and Scary Dude was escorted off the premisis and asked not to return. I should have excused myself the minute I got to the first date with hind sight, if he was lying/misleading people with his profile it wasn’t a good indicator for his personality in the long run. I might be shallow for being attracted to a certain type of person but at least I’m honest about it! Both of Scary Dude’s profile were removed from MSF and I never saw him again after that but he intiated the “emergency” text protocol I now have!