You’ve probably noticed I’ve had a bit of a play around with the layout and look of my blog, when I started this a month ago I had no idea if I’d keep it up, enjoy it, get any readers or think of enough things to actually write about! Well I’m thoroughly enjoying it and so far managing to post everyday, this might well change if I get offered the job but I’m still waiting to hear about that after four weeks so who knows! As I’ve said I’m a girlie girl with a bit of geek thrown in so I thought I would pretty it up around here a little and I’m quite happy with the results.

My new desk arrived today at stupid (8.15am) o’clock this morning…..don’t they know I’m a night owl who doesn’t get to sleep until about 4am and usually doesn’t surface until gone midday? Grrr! However my desk is lovely and has finally allowed me to clean up the “messy” corner of my room which is a relief (I hate mess, I’m a bit of a tidy freak although not a clean freak as Foxytron will testify to!). Fun and games with flatpack furniture is always interesting but it’s not fallen down yet…. 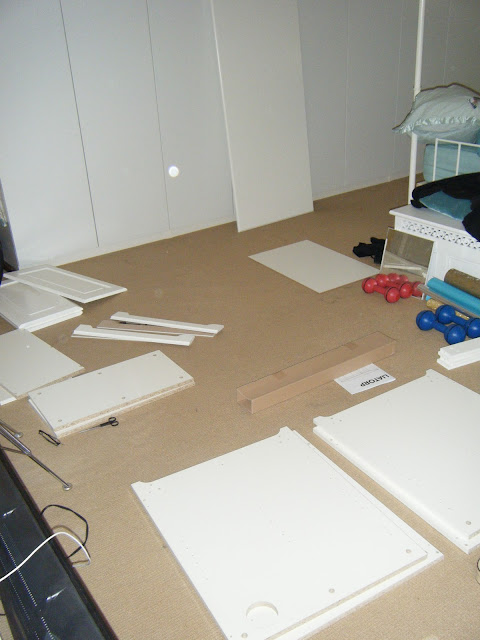 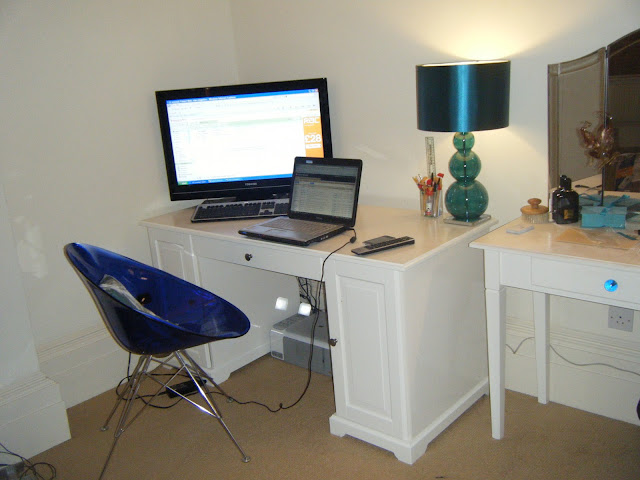 …..see! I now can’t wait to get sewing again, I’m in the middle of a halter neck playsuit in this fabric….. 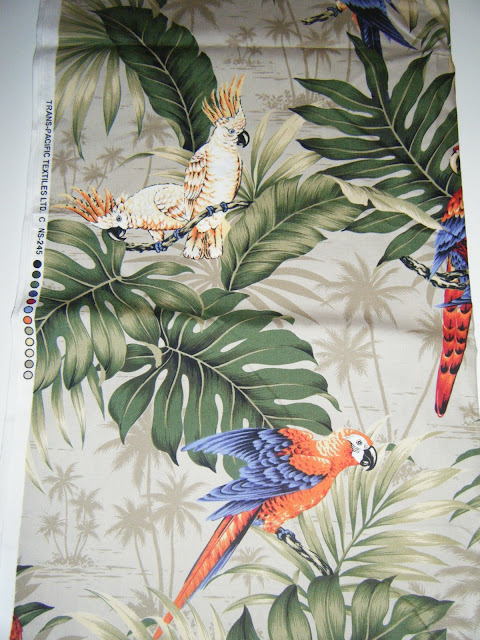 …..which I love and it came all the way from Hawaii. I bought loads of different fabric designs from this amazing website I found, the people there are lovely and very very helpful. I’ve already made this dress…..(that’s me and my Papa) 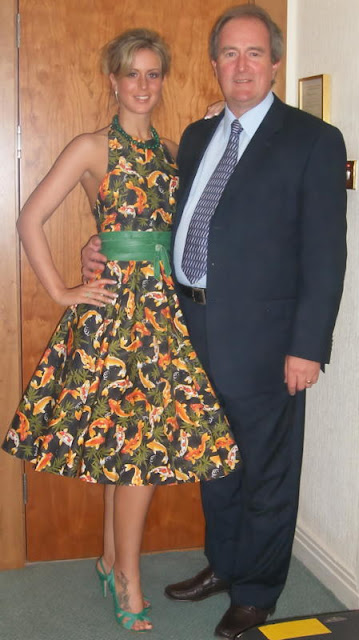 …..out of the Koi Pond bolt that I ordered, and I have loads more ideas for 50’s style dresses and prehaps even my first attempt at a coat! Should be interesting and I’ll post up pictures of the results (as long as they’re wearable!).

So today I’m wearing jeans and a vest for the manual labour (ha!) that is flatpack building…I will probably just throw on a jumper and some boots for the walk up to work tonight but for the actual building I needed ease of movement and nothing flowy to get in the way of my screwdriver!

Very quick dating disaster today, so I received a few emails off this guy from Match.com they were funny as was his profile and he was very cute in all his, many, pictures (you can have up to 20 odd on Match) and tall, yay! We agree to meet for a drink in town and I’m quite looking forward to it.

Now you’re allowed to describe a rough “criteria” of what you are looking for in potential dates which, supposedly, gives people looking at your profile an idea of whether or not you’d be interested in hearing from them. For example mine was; a male between the ages of 30 – 40 years old, no children, no long hair (it’s wrong for a man to have longer hair than me!) and over 6ft1″ tall (I’m 5ft8″ and wear high heels a LOT so I wanted someone taller then me after the disaster that was Short Guy). One of the joys of internet dating is you get to search just for what you want and you can be very picky without hurting anyones feelings!

So off I trot into town for my date and I’m really looking forward to it, we’ve gotten on well via email and had a fairly lengthy chat over the phone (another rule I imposed after a very stilted date with Boring Guy, there’s another story). I get to the pub and spot, let’s call him Deluded Guy, at the bar. Deluded Guy is really cute, yay! I walk over say “Hi” and Deluded Guy jumps off the barstool to kiss my cheek hello and he can’t reach it! Deluded Guy is tiny (5ft7″) and I’m in 5″ heels….on his profile Deluded Guy had claimed to be 6ft2″. Ooooooo Mmmmm Geeeeee, I couldn’t believe it. Why lie? What is the point? It’s not like you are on these sites to find pen friends you actually want to meet these people in real life and if you’ve lied on your profile it doesn’t bode well for any type of relationship you will have from then on. I said as much to Deluded Guy and excused myself.

I get a text from Deluded Guy about twenty mintues later saying “how shallow I was” and “how I should have a least stayed for a drink and given him a chance, so what if he’d added a few (7!!!) inches to his height on his profile!”. Now call me shallow but I am allowed to like what I like in the opposite sex and after Short Guy that is definitely someone taller than me in my biggest heels. If Deluded Guy had been honest on his profile then, he was right, I wouldn’t have met him for a date but what worried me more than his (lack of) height was his flexibility with the truth. If he’d lied about that just to get to meet girls then what else was he capable of lying about? No thanks I don’t want to find out!