Tonight V, Mrs B.G., L, L’s sister and I are off to Wembley Stadium to watch V’s rockstar boyf do his thang. This is the second Pendulum gig I’ve been to this year and I am very much looking forward to it. L her sister and I are also going out to Merah afterwards so a night of partying and then a day of sore heads tomorrow I’m sure!

Today I’m wearing this (I look like such a grumpy bitch in the first photo!)…. 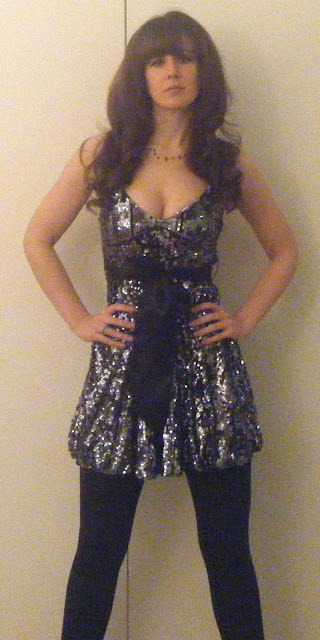 I feel like a Christmas tree decoration tonight! I will of course be putting on lots of layers over this for the getting to and from portions of the evening but for the rest, which will be hot, I shall just wear this sparkly lovely. I love these boots but I’m thinking they may be a little silly to wear out in this weather, we shall see….

So today I thought I would tell you about The Stoner, I mentioned him a little while ago in another post and today I shall tell you his story….are you sitting comfortably? I met The Stoner on My Single Friend he started emailing me, we got on very well both via email and over the phone so we arranged to go on a date.

I arrive at our date and have another PHWOAR moment so get a little bit tongue tied but after a few cocktails we are getting on like the proverbial house on fire, excellent! The Stoner walks me home and kisses me on the cheek and the next day I text to say I’ve had a lovely time and does he fancy dinner soon? He does, fab!

The Stoner and I go on another few dates and things are going very well, he’s lovely to be around; funny, charming, great kisser and very chilled. We’ve been dating for about six/seven weeks when he asks me to meet his friends and while we are out at the drinks he calls me his girlfriend during a conversation with his friend. Awwww! I hadn’t been someones girlfriend for a long while and there wasn’t any big drama around the “girlfriend” word which was a refreshing change.

I ask The Stoner to meet my friends and we decide to go to the Tutankhamun exhibit at the O2 together, we have a fab time and we all head back to mine to have a few drinks and carry on chatting. When The Stoner leaves Tatty and her friend are gushing about how lovely he is, which is amazing Tatty usually hates all my boyfriends! One of the comments was about how chilled out and relaxed he seems about eveything…..

At this point The Stoner had only ever invited me out or come over to my place, he never really stayed over as he doesn’t seem to sleep very well (something he says he’s suffered from for ever) and if he does stay he leaves at 7am which I hate as I’m a night owl. He’s let me down a few times about dates but usually in such a way that I didn’t feel like he was standing me up, he had his own business which wasn’t restricted to “normal” office hours so I thought it was fair enough if things “came up” (things did seem to “come up” when he’d been spending time with his friends though).

The Stoner finally invites me out for dinner in his neck of the woods and we plan to go back his place to watch a DVD afterwards, I’m really looking forward to it. We have a lovely dinner and get to The Stoners house which an amazing place on the Thames in Chelsea. The minute I get in the front door however I can smell pot and everything kinda clicks as to why The Stoner is the way he is! Doh!

The Stoner had been saying since I met him that he had an addictive personality but had never said he was actually addicted to anything! While we were watching the movie he asked if I minded if he had a smoke, I said no it was his house after all, but I have a real problem with drugs (for various reason that I won’t go into) and have never taken anything in my life (except for Morphine but I was in hospital when they gave me that so it’s allowed).

I didn’t sleep very well that night but he did (somewhat ironic) and I got up very early to walk home. I decided that was daft and sat down with The Stoner to talk about why I was upset about the drug thing, he completely shut down and wasn’t interested in listening to my point of view at all. He just kept saying he’d tried to quit for a relationship before which had been s**t and he’d never do it again he “needed” to smoke everyday to function and had no interest in stopping. I’d like to point out that I never asked him to stop I just wanted more information and the truth about all the times he’d flaked on me (he was high every time and trying to hide it from me, it had nothing to do with work!).

The Stoner suggested I think about what I wanted and we’d talk in a few days, during those few days he was back on MSF every day so I knew he wasn’t interested in anything but the next girl he could date. He finally called about a week later to say he didn’t think we should see each other anymore, eerr no s**t Sherlock! I have no need for a lovely but flakey addict in my life ta very much!