So yet again I’ve been M.I.A. and for quite a while this time. In all honesty I’ve been feeling a little stuck……I started this blog in the hopes that it would inspire me to use more of my, frankly, huge wardrobe. I’d found myself stuck in a rut of jeans, tees and my favourite sequin flat shoes (flat boots in winter) with the occasional dress thrown in for nights out. I decided that if I was going to be photographing myself for the blog I’d make more of an effort with what I was wearing…..which I did. The trouble is that now I’ve started working in a uniform I’ve found myself reverting back to the jeans, tee and sequin flats options to get to and from work in. Frankly I’m bored of looking at myself in the mirror so I wouldn’t want to bore you with it! It’s very lazy of me…….it’s got to stop…….to this end I’ve had a huge clear out of my wardrobe (big pile of things to be eBayed…….eep!) and have decided, again, to make more of an effort even if it is only to go work! Plus I need to get back on track with my Shoeperwoman Shoe Challenge especially as I seem to have increased my collection by about eight pairs…..ooops!

As you may or may not remember I also broke up with Blue Eyed Guy a few months ago (amicable, Blue Eyed Guy is totally fab and his next girlfriend is going to be a very lucky lady) so I’ve been living the single girl life in London which is always fun, especially as I now have my fellow Bunnies to hit the town with! I’ve also signed up to MSF (My Single Friend) again which, so far, has been fab…..fingers crossed I won’t have too many dating disasters to tell you about!

Currently though I’m in the middle of eighteen days of holiday and I’m spending them on the Isle of Wight with my Mum and Papa. Little Bother and his brood were here for a few days (two weeks in total but only a few whilst I was here too) but now it’s just the three of us and we are doing……..not a lot! It’s lovely to see Mum again, she’s been living in Saudi Arabia since November and this is her first trip back to the UK since then. I just wish there was a little more sun, I’ve got comedy tan lines from the one day we’ve had so far and I need to even them out before I go back to work! 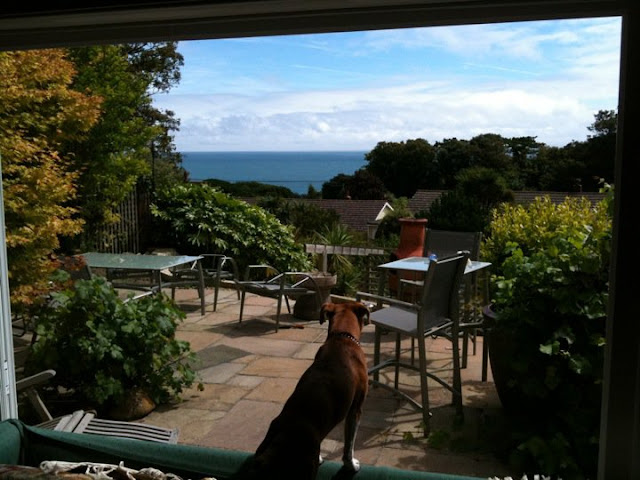 The Ginger Terror enjoying the fabulous view
I hope you’ve all been having a wonderful summer so far?
Lot’s of Love
P.S. x﻿
Liked it? Take a second to support Kittenish Behaviour on Patreon!