Dramatic drum roll if you will……..I bought some foundation today! Now, I know this might not seem like a life changing event but for me, you see, it is.

About five years ago I woke up with very painful, very itchy eyes. When I finally stumbled into the bathroom to have a look in the mirror to see what the hell was going on, what was staring back at me? Bug Eyed Lady with bulging eyes the size of golf balls, thats what! After picking myself up off the bathroom floor twenty minutes later when I came to from the fainting fit that had, naturally (I think) occurred on my first viewing the bug eyed glory, I had a little cry and promptly sent myself back to bed. Crossing my fingers that the golf ball sized swelling would go down soon and I could get on with my life as normal.

After about 24 hours of sitting on my hands trying not to scratch my stupid itchy bug eyes I was getting to my wits end, I was even considering taping oven mitts to my hands á la Phoebe…..

……to stop myself from scratching! I tried cucumber slices, tea bags, cool eye masks (you name it I tried it) to get the swelling down and finally something worked and I went back to my usual self only now with massive red flaky patches all around my eye, lovely!

At no point during this process did I think that my beloved foundation was to blame I just thought I has some kind of eye infection (nice) or something. After about a week the redness and flakiness had also vamoosed so I merrily put my make up back on and headed out the door, about two hours into my day however my eyes started getting all itchy and sore again. With a rising sense of dread I found a mirror and managed not to faint this time, Bug Eyed Lady was back! ARGH! I got home took all my make off and started to put two and two together, then I cried.

Now a little history about me and my love affair with make up; I used to be one of those people who would not leave the house without a full face of make up on, the works, everything! Don’t get me wrong I never caked it on and I like to thing that although I was wearing a full face I didn’t look like one of those girls you see on “Snog, Marry, Avoid?” (God I hope I didn’t) but it made me feel more confident about just being out in the big wide world if I had my mascara, eyeshadow and touché éclat on. What was happening to me now was a nightmare.

I do realise in the wider scheme of things an allergy (oh yes I am allergic) to make up isn’t life shattering but it is a big deal, especially as I was then making my living modelling, hostessing and generally cashing in on my luck in the genetic lottery (thank you Mum and Papa!). I have to admit that I became a bit of a recluse. I didn’t want to go out in the daytime let alone out with friends for an evening of merriment. I know, I know how very shallow of me! I have a lovely (if I do say so myself) personality and I am definitely not just a pretty face but make up gave me confidence and having that taken away after ten years (I started wearing make around sixteen….ish) was unnerving and scary.

I went to doctors and then to specialist dermatologist who after a lot of tests (and a shed load of money) told me that I probably had contact dermatitis that was being inflamed by the preservatives in liquid make up, great! This was their best guess however because all the allergy tests they did were inconclusive……funny that the skin on my back reacts differently to the skin on my face hey?

I spent a few months making myself go out in public bare faced but I hated it. I’m lucky enough to look really young for my age (or so I’m told) but it was getting beyond a joke the amount of times I was being I.D’d for things like lotto tickets, party poppers and such…..you have to be over sixteen FYI…..I was twenty six at the time!

I wrote to my favourite magazine, InStyle, to ask for advice and they published my question (I still have the page now) and recommended hypoallergenic make up……nope no good, Bug Eyed Lady came back. So my brain, slowly I admit, started thinking of other possibilities……

“you’re allergic to liquid make up……hmmmmm how about powder based make up? Eureka!”
…..I went and bought myself some pressed powder and loose powder and experimented…….finally, success! I didn’t look like I used to but it did give me some of my confidence back which is what I wanted and so I started my new life.
I have to admit that not wearing all the products I used to had done wonders for my skin, which was a good job as the powder I was using wasn’t great at covering up flaws and blemishes. Plus the amount of time I saved getting ready was also great. The only thing I then struggled with was mascara or the lack of it. Thankfully the make up Gods knew of my plight and decided to introduce individual eyelash extensions to the world and I’ve been a devoted fan ever since.
I’ve had lots of people recommend different types of make ups to me over the last few years but I haven’t been brave enough or actually ever really wanted to try any of them. Being only able to use powder does get a little boring sometimes especially when I see glittery eyeliners and cream eyeshadows being raved about but I figured what I was doing was better than another visit from Bug Eyed Lady so along I plodded!
However I’ve never been really happy with the way my skin can, only sometimes (thankfully), look uneven and a little blotchy but I figured I’d have to live with this. Recently though I was at work during a night shift and someone had left MTV on which (very randomly in my opinion) changes over to infomercials at about 3am! I’m a sucker for a good infomercial so I sat there and watched all these American ladies rave about this stuff called Sheer Cover. I was a little skeptical about the wonder results they were gushing about so I decided to do some digging of my own and started looking at reviews online, some people loved it and some people hated it (that does seem to have more to do with the service they received and slightly unrealistic expectations I think though) so I took the plunge and ordered a set for myself. I chose the medium shade, placed my order…… 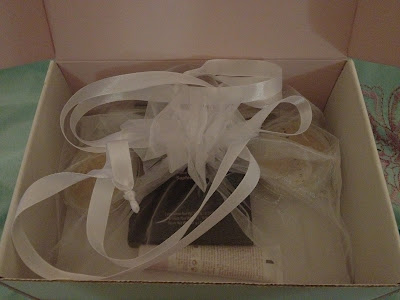 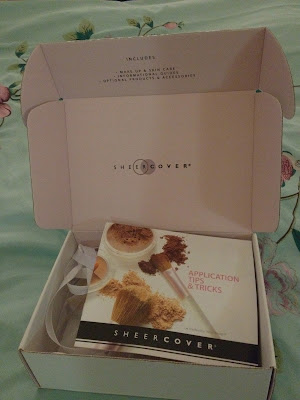 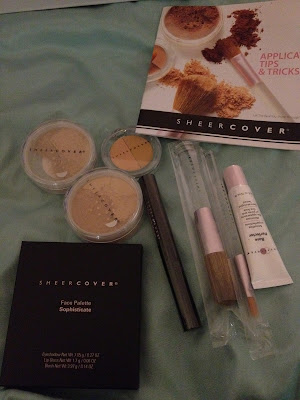 ……and then today this little lot arrived! I’m very excited to try it out finger crossed for me please. Have any of you tried out this stuff? If you have what did you make of it?