It’s Going To Be Interesting

I have my second date with Mr Butterflies (it was either that or Mr Experiment) tomorrow, we are going for sushi (I’m not sure what Jenny Craig would make of this). It’s going to be interesting. I am looking forward to a night out, a chance to dress up and what I expect to be another pleasant evening but I’m not expecting the aforementioned butterflies to make an appearance and maybe thats a good thing? Who knows…..as I said if nothing else at least it will be a lovely evening with good food and interesting company.

Rather randomly Mr Fireman got in contact again today which was a little odd. I never mentioned Mr Fireman before, brief backstory; I accepted a date with a cute 6ft5″ fireman (I’m nothing if not original with my nicknames hey?) back in December, we ended up going for a few drinks at one of my favourite pubs which was lovely. I met him straight from work and I was a little early and for some reason that night I managed to get chatted up by three different people before Mr Fireman arrived! When he did arrive he was just as tall as he said (big relief, why do guys lie about this??) and looked better than his pictures but no I didn’t fancy him (of course). I told him of the fabulous one liners that had been used on me before he arrived and we generally had a very lovely evening laughing and chatting.
I was in the middle of my Christmas Rota which meant that I didn’t have a day off until the New Year but I did want to see Mr Fireman again just to make sure there wasn’t a PHWOAR factor as, on paper at least, he was perfect. I texted and got a response back pretty much immediately saying that he had really enjoyed our date but had met someone else and gotten on so well with her it would feel weird to go on a date with me. I was totally happy for him and wished him well, he genuinely is a lovely guy and deserves to find someone amazing.
Back to the present day then. I got a text this morning from a number I didn’t recognise just asking how I was and what I was up to. I asked who it was and when he told me “it’s Mr Fireman!”(he obviously used his real name, he doesn’t call himself Mr Fireman…..at least not to my knowledge) I responded in friendly manner asking how he’d been etc…. Now don’t get me wrong I do still think he’s one of those “perfect on paper” guys but I know I didn’t fancy him and I’m not really sure I want to meet up again, hmmmmmm. (I’m going on the assumption that he’s single again by the way and you know what they say about people who assume…..)
In all honesty I’ve kind of given up on the whole online dating thing, after six years on and off various websites I’ve actually ran out of men that I either  A: want to go out with or B: haven’t already been out with. It seems the dating pool of men I am interested in is fairly small in London, who knew! I am actually very happy single, I’m not saying that I don’t want a relationship in the future but for right now life is good.
In other news I’m glad I’m starting my shopping ban on the 28th March …….. 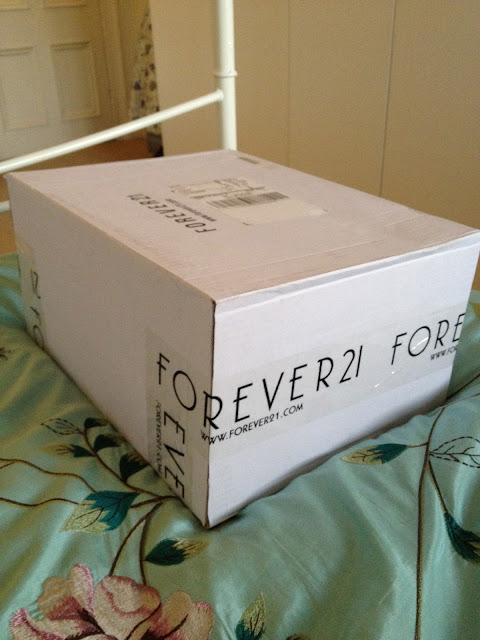 ……I was window shopping on Forever 21‘s website and found (read snapped up immediately) a few things that I love. I’m already planning on wearing some of them for my date tomorrow night which I promise to take outfit photos for. I may have accidentally window shopped on Topshop‘s website too and these…… 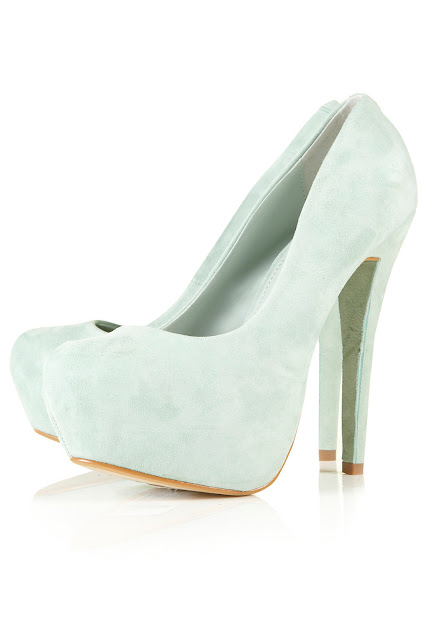 …….are apparently arriving tomorrow too, ooops! It’s ok though because I’m going to take back the snake print shoes I showed you the other day because despite how lovely they are they rub on my ankles and I’ve only put them on to see how they looked with a pair of jeans so I think a night in them would be agony! Ah well suede minty goodness come to Momma!
Rather excitingly (for me anyway) I’ve decided to take up jewellery making…….well it’s really more putting together components I’ve bought/found to make necklaces that I love. To celebrate this I’ve decided to do a giveaway, my first one ever! Come back tomorrow for more details!