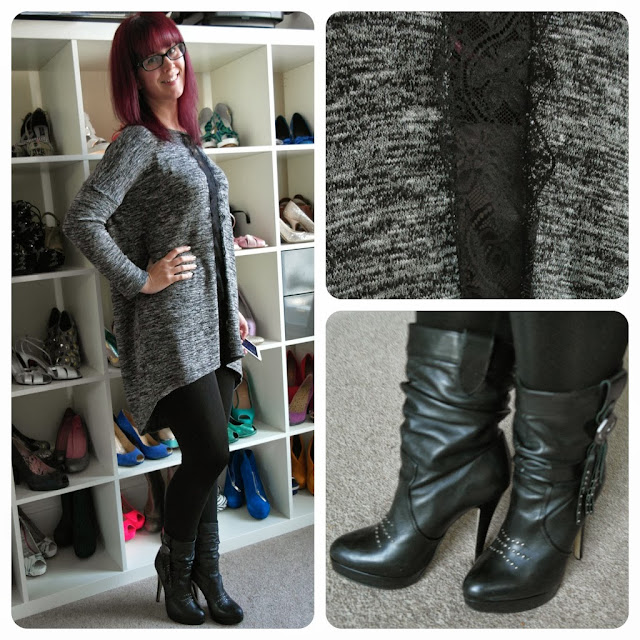 Top: Miss Selfridge
Leggings: American Apparel
Boots: Kurt Geiger
…I have no idea how I ended up buying this top. I was browsing the Miss Selfridge website and somehow it ended up up in my basket. I’m so glad it did, it’s definitely not my usual style (errrr Hello where’s your waist?) but I love it, I think it’s the lace panel and hint of naughtiness…you can totally see my bra!

So, I haven’t told you a dating disaster for a while now…..probably because I was in a relationship for a bit (well, eleven months) and also I hadn’t been on any really awful/funny dates in quite a while either. Recently my flatmate Legs introduced me to a new app called Tinder which basically shows you other users of the age range you set within an area you specify and if you both like each other you can start chatting. Now there were five of us sat in my front room having a right giggle liking or discarding potential matches whilst drinking the vino so as you can imagine none of us were taking it too seriously. The other ladies were looking for guys in a certain age range and at one point three of them had liked the same guy who then started a conversation with each of them!

I found a few people I quite liked the look of and one of them happened to be the Walrus of Love as he shall now be known. We chatted a bit for a couple of weeks (I was down on the Island with my folks) and we eventually agreed to meet up for some drinks once I was back on the mainland. So the day of our date arrived and I have to admit I wasn’t overly keen…you see I’d been on my first date with Mr McFly the night before and it was amazing (although apparently I need to work on my flirting technique as Mr McFly had no clue that I like him!). I decided that I would still meet up with the Walrus of Love so off I headed. The minute I saw him I knew there was no spark but you can’t just turn up, look at someone and say “nah, no thanks!” besides I enjoy meeting new people so I thought an enjoyable evening could be ahead.

The Walrus took me to a wine and cheese bar which was lovely, we found seats, grabbed a bottle and a cheese board and started with the standard get to know you questions that I’m sure happen on every first date. Apparently I’m edgy/alt because I have (had) bright red hair and at the time had my nails painted five different pastel hues, ok then. After about twenty minutes of chatting the Walrus kind of lunged at me for a hug….well thats what he said but I think he was aiming for a kiss….my cheek got slobbered! Even if I had fancied the pants off him this was way too much way too soon, especially as the bar was so busy we were sharing a table with two other couples (nothing more cringey than having the get to know your date conversation when other people can hear you and then having to fend off a random lunge!). I kind of smiled at him and gave him a half hearted pat on the back until he let me go, any boys out there reading this (?) do NOT do this it is BAD!

After we had finished the wine and cheese the Walrus suggested a stroll to another bar along the Southbank, hmmmmm ok. We were wondering along and he grabbed my hand, again WAY to soon for anything like that we’d only known each other for and hour and a half! Instead of heading straight to the bar the Walrus pulled me over to the railings to look out over the Thames, very pretty and quite romantic I guess but I was just feeling on edge from all the inappropriate touching. Unfortunately that wasn’t going to stop anytime soon as instead of letting me lean against the railing the Walrus tried to manoeuvre me so that I was leaning on him, errrrr NO! It got to the point where I had to tell him he was being way to forward and to please stop, his reply; “you have too many rules, if I feel something I just go for it!”. Dude really? You are going to get yourself in to all sorts of trouble if you carry on like that.

We got to the pop up bar he’d been talking about which was very nice, grabbed some drinks and then went to find some seats outside. Even after me asking him to back off with the touching he tried the classic “Yawn and Hug” technique….again Dude, really? The wine I had was actually awful and I was beginning to feel the effects of staying up and chatting till 5am in the morning (told you it was a good first date with Mr McFly) so I did the “Yawn and Send Yourself Home Early” ploy. I had spent a two hours with the Walrus.

Ok, so you are getting the impression of this date from my side but honestly would any of you say it went well? I didn’t think so and after I got home I thought that would be it….oh no. I got a Facebook message the next day asking what I was up to that week, I didn’t reply immediately which prompted a “I take it you’re washing your hair then” message an hour later from the Walrus! I replied politely that I was indeed busy and I hoped he was going to have a great weekend (he was off somewhere for a jolly). I myself was off up to Glasgow for Mini Ginge and Boaby’s wedding which I was very much looking forward to and indeed it was amazing. Around 2.30am on the Sunday I got a couple of WhatsApp messages from the Walrus one of which was a voice recording! Alcohol has much to answer for I know. The next day he messaged again to apologise and claim he had no idea why he sounded so much like Barry White (hence the nickname) by this point I felt justified in ignoring him, all just a bit too weird for me!