I thought I would share some of my random brain thoughts with you today and something that has been floating around my prefrontal cortex quite a bit of late is the oddness of boys! Now I started dating my very first boyfriend at the ripe old age of fifteen which means I have been in the dating game for a whole nineteen (!) years and I’ll let you into a little secret…….boys are weird (not saying girls aren’t because we are….totally)! Now I am sure that most you know this already but I thought I would share a few of my experiences on the subject……here goes…….

Example One: A previous boyf was kind, generous and on the odd rare occasion actually quite funny but he had the complete inability to verbalise his feelings in any way shape or form. After eleven months together the most he ever said was “I care about you a lot” (promptly followed with “but you’re not a priority”) and it wasn’t until after we had broken up that the “L” word was even uttered. Said boyf was a firm believer that actions speak louder than words and that was that. If I couldn’t interpret the way he felt about me from how he acted then mores the pity in his opinion. All well and good I suppose if he was treating me like an important part of his life but I was definitely an afterthought and he’d told me himself I wasn’t a priority. I am the kinda girl who likes affection both physical and verbal and the longer it went with him saying absolutely nothing and treating me the way he was the weirder it got for me and the more I withdrew from him! I do agree that “words are wind” and ever so easy to utter but to hear nothing affectionate at all over eleven months……odd!

Example Two: An ex boyf of mine who I remained friends with until recently seemed to only be romantically attracted to me when I was off the market and dating someone else. I say this because it’s been the case three times now. Actively pursuing me until the minute I become actually available and then all interest disappears and weirdness ensues. Odd.

Example Three: Another ex boyf/fling of mine got in touch a few years ago and has, randomly, over the years been asking for a catch up which honestly I would have liked but for one reason or another I never actually agreed to until recently. The minute I said yes and set a date weirdness ensued and suddenly other plans materialised and any attempt on my part to reorganise the catch up was met with vague non answers. Odd (He’s since been in contact about once a month via text…which I have been ignoring, honestly life is too short!).

Example Four: I met someone rather dishy earlier this year who I immediately hit it off with, lots of banter, lots of laughter and lots of kissing. We exchanged numbers and agreed to meet up for a second date which also went (I thought) rather swimmingly. Now when I first met him he had broken up with his ex a week before and he waited (four days) to ask me out on our second date to ensure that everything was 100% finished with her as she wasn’t taking things too well which I thought was rather lovely of him. After our second date we made plans to meet up again and the banter continued until I got a message saying that he needed to rain check our plans as his ex was still very unhappy and he couldn’t morally date someone else with that sill going on. Me being me I replied politely that I understood and would rather have 100% of his attention than a him distracted by someone else (which was true) but I was a little confused. If he’d been with his ex for years I would totally understand the amount of time he was allowing her but they had been together for four months. I came to the conclusion that he “just wasn’t that into me” and moved on but…….odd!

Example Five: I was dating someone recently for about two months (fabulous boy Mr McFly) and everything was going great until the morning of a trip up to Manchester. I sent a text saying the hotel was booked and got a reply saying we need to chat before the trip and could he come back over (he’d come over for dinner the night before). Turns out that he’d been thinking about the boyfriend/girlfriend thing and his gut reaction was “argh relationship”! Apparently he though I was awesome, loved spending time with me and couldn’t imagine not having me in his life but not as his girlfriend! Perhaps a cinema buddy that he fancied……his suggestion! Now to be clear I hadn’t been pushing the bf/gf issue, it had occurred to me and I was happily heading in that direction but hadn’t verbalised these thoughts as yet (I hadn’t felt the need as everything was going swimmingly). Mr McFly did say that he wanted sometime to cool off and try and work out if it was an initial “argh relationship” knee jerk reaction or if it was us specifically that was the problem which I initially agreed to but I ended up calling it a day because who wants to hear twice that someone really doesn’t want to be with you! I think Mr McFly is awesome too and hopefully we’ll end up as friends….eventually! Still……ODD!

I was talking to my friend L about all this and she asked if I had read He’s Just Not That Into You which in fact I had (I think it came free with Cosmo a few years back) and it got me to thinking. I grabbed myself another copy and had a look. You know what I’m sure there are exceptions to the rule but if a guy is not treating you well and not making you feel loved, not calling you when you are available, cancelling plans last minute, giving you excuses as to why he can’t date you just now or is actually telling you he does not want to be your boyfriend then…. 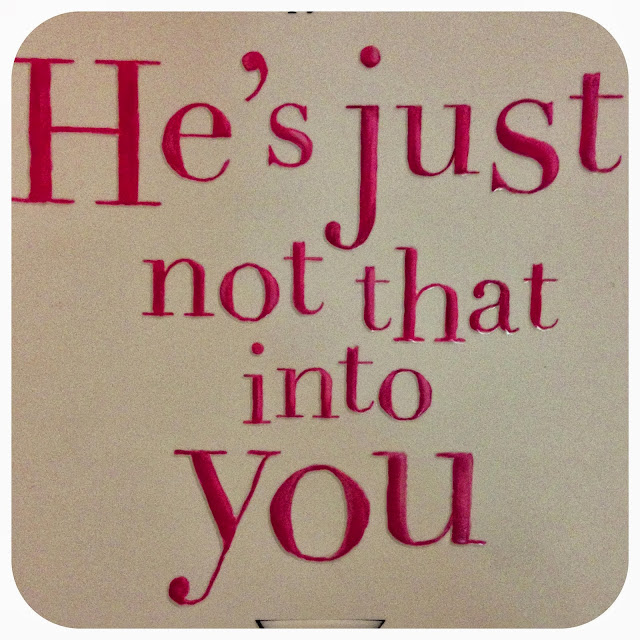 Seems obvious no? I tell you what though I never fully appreciated it for the whole nineteen years of dating that I have enjoyed (because I have enjoyed most of it) until now. Yes relationships are hard work, they need effort and attention if they are going to work but it has to come from both of you! What do you guys think? I’d love to hear!