Over The Rainbow – My Very First Quilt

It’s been rather quiet here on the the blog because I’ve been sewing like a crazy thing. I have a few finished dresses that need photographing but the main reason for being MIA is quilting. I’ve mentioned before that my Mum is a quilter, she mainly does art quilting which is amazing but I did manage to talk her in to making me a more traditional quilt for my Christmas present last year. When I was looking for the fabrics I started looking at different designs and totally got sucked down the rabbit hole….soooooo many pretty things! I came across Kaye Wood on YouTube, she was demonstrating a Double Wedding Ring quilt technique that only used one template and I was sold! It’s the Phillips Fiber Art “Rings That Bind” and it’s awesome.

It’s was my friend Miss S’s 30th birthday this past weekend so I started asking for her favourite colours (pinks and blues) and whether she liked graphic or floral prints (both), with that as a starting point I picked out these…. 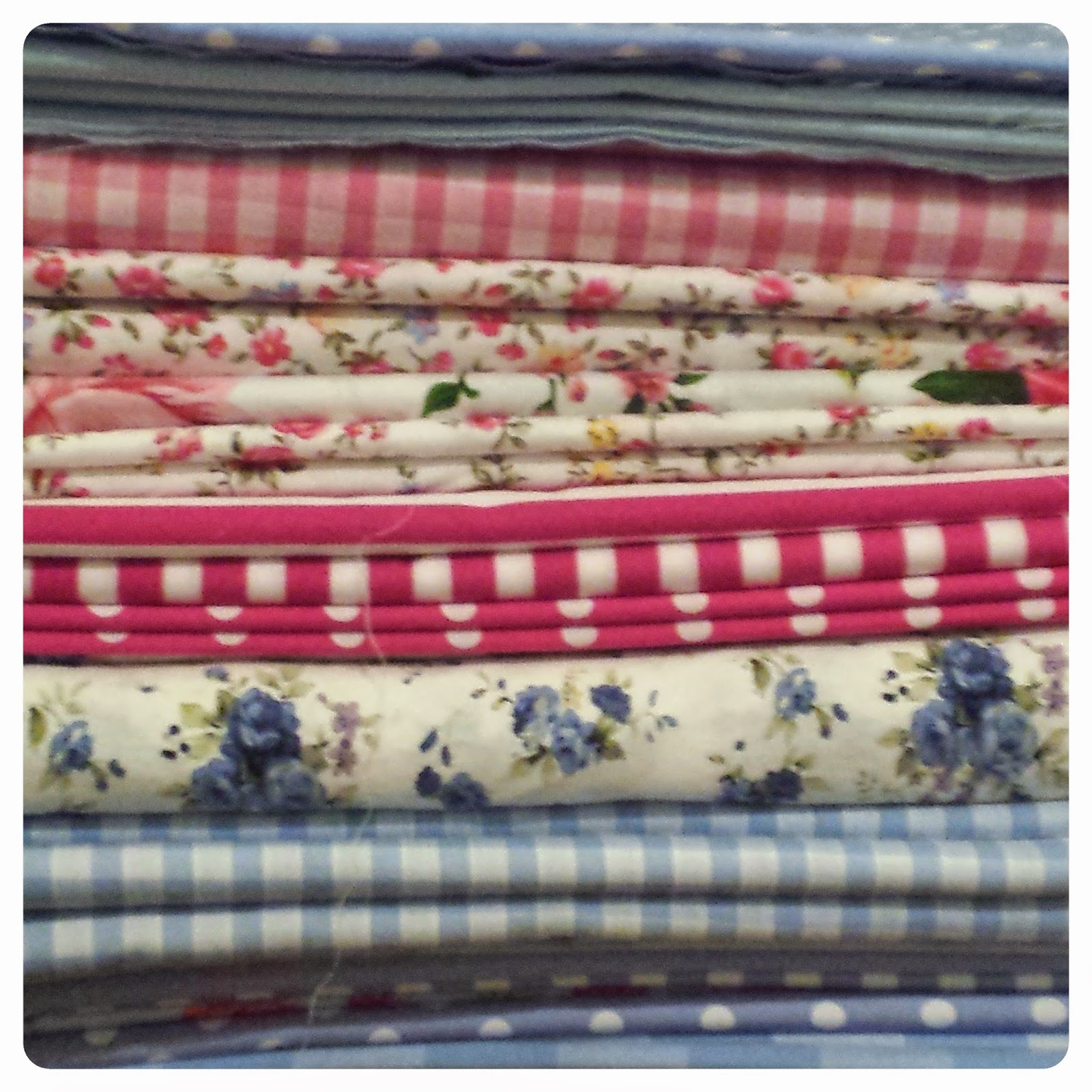 …..the book gives you the yardage you need for each size of quilt which is great, I ordered a little more of each just in case I messed anything up! I decided to make a pieced arc double wedding ring so first up is cutting a whole bunch of strips…. 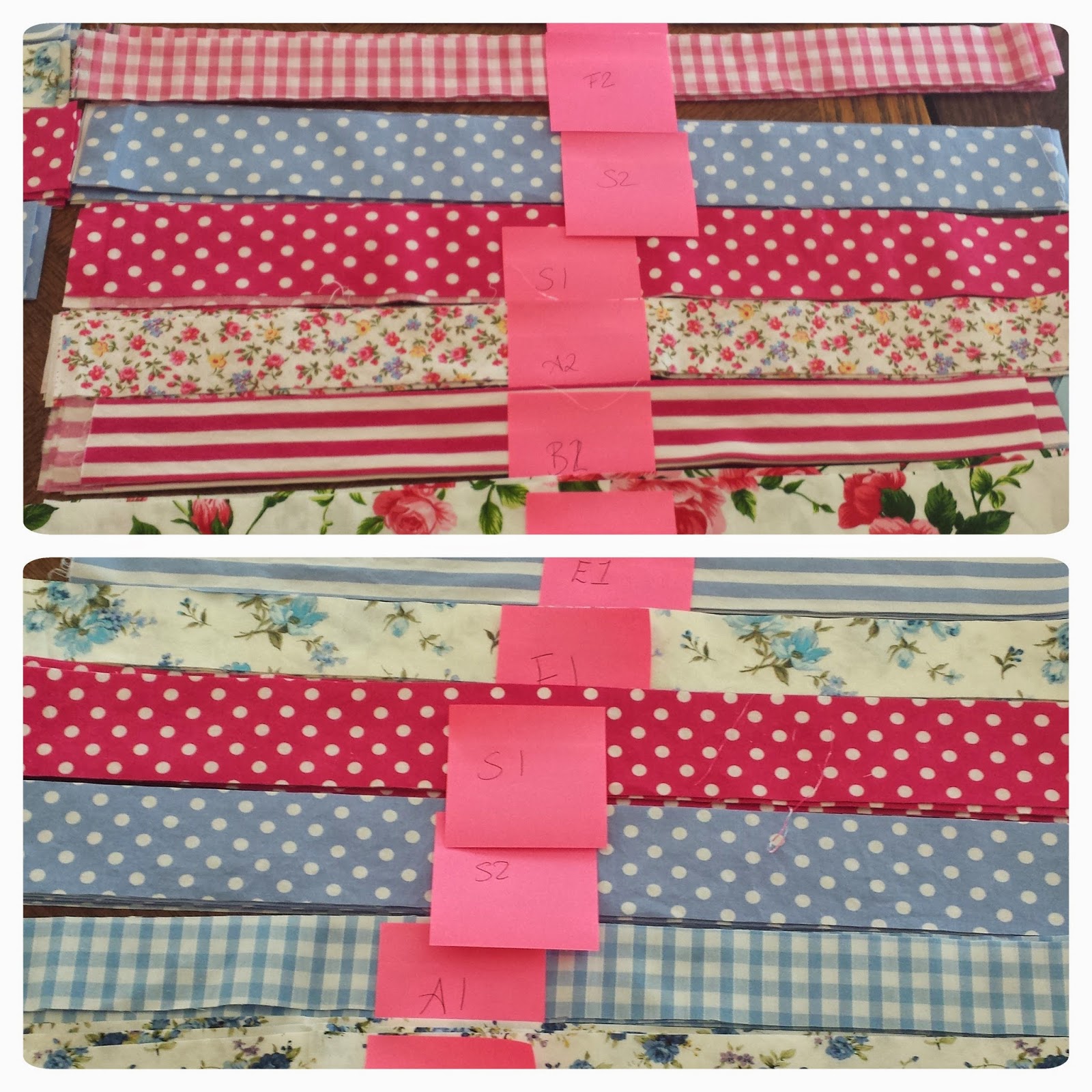 ……..and sorting them into sets. Next up making “fabric” and making sure you do it with a quarter inch seam allowance. I didn’t have a quarter inch foot and by this time my Bernina bobbin hook had decided to throw a tantrum and stop getting along with the needle…..joy. Luckily my little Singer has feet with quarter inch toes so I just used that as guide….. 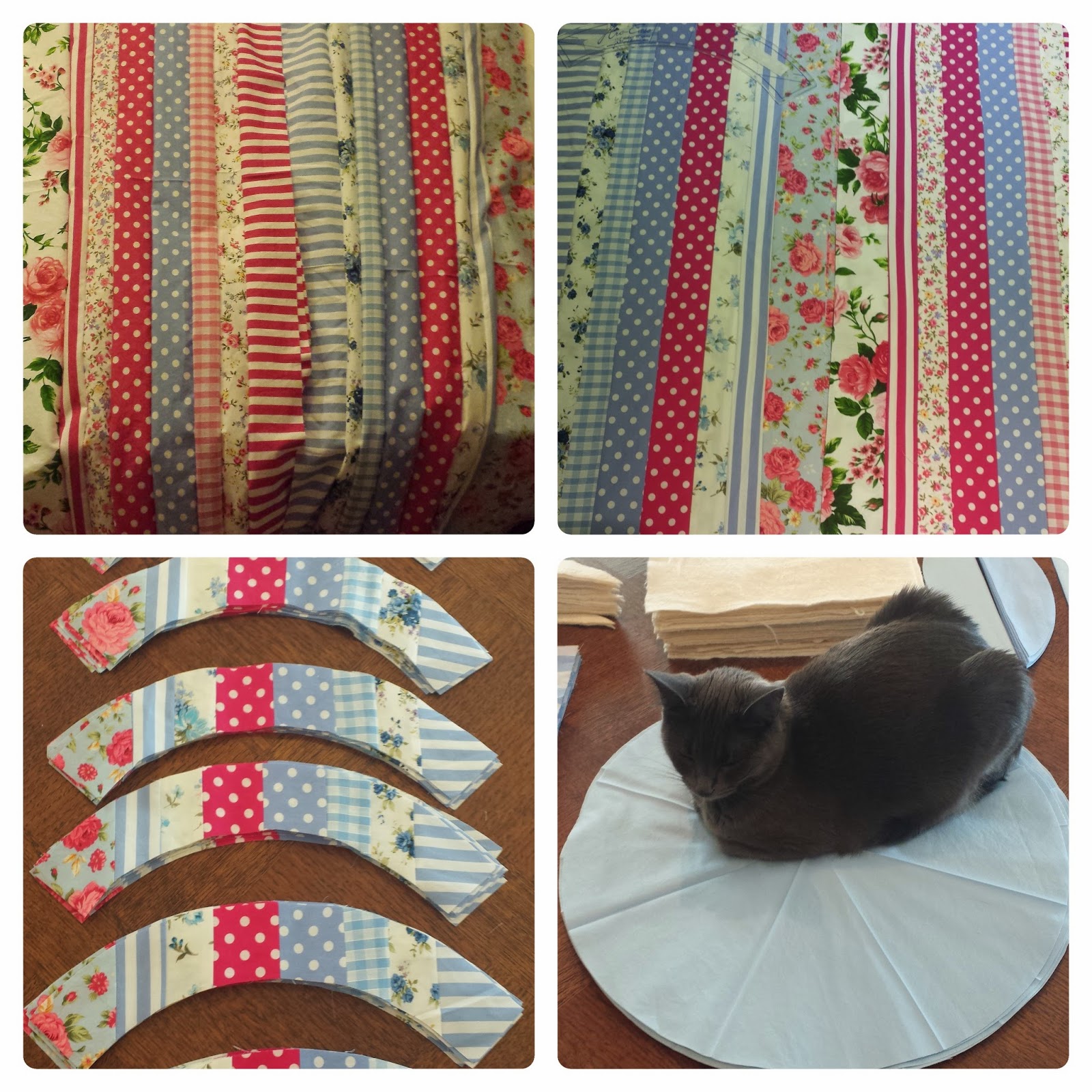 ……once sewn together and pressed you then have to cut your arcs all one hundred and twenty of them, I also cut out the backing, batting, scallops and front squares at the same time. As ever Chiana had to in inspect and fluff every stage of the process…I think she approves. Next up making circles…. 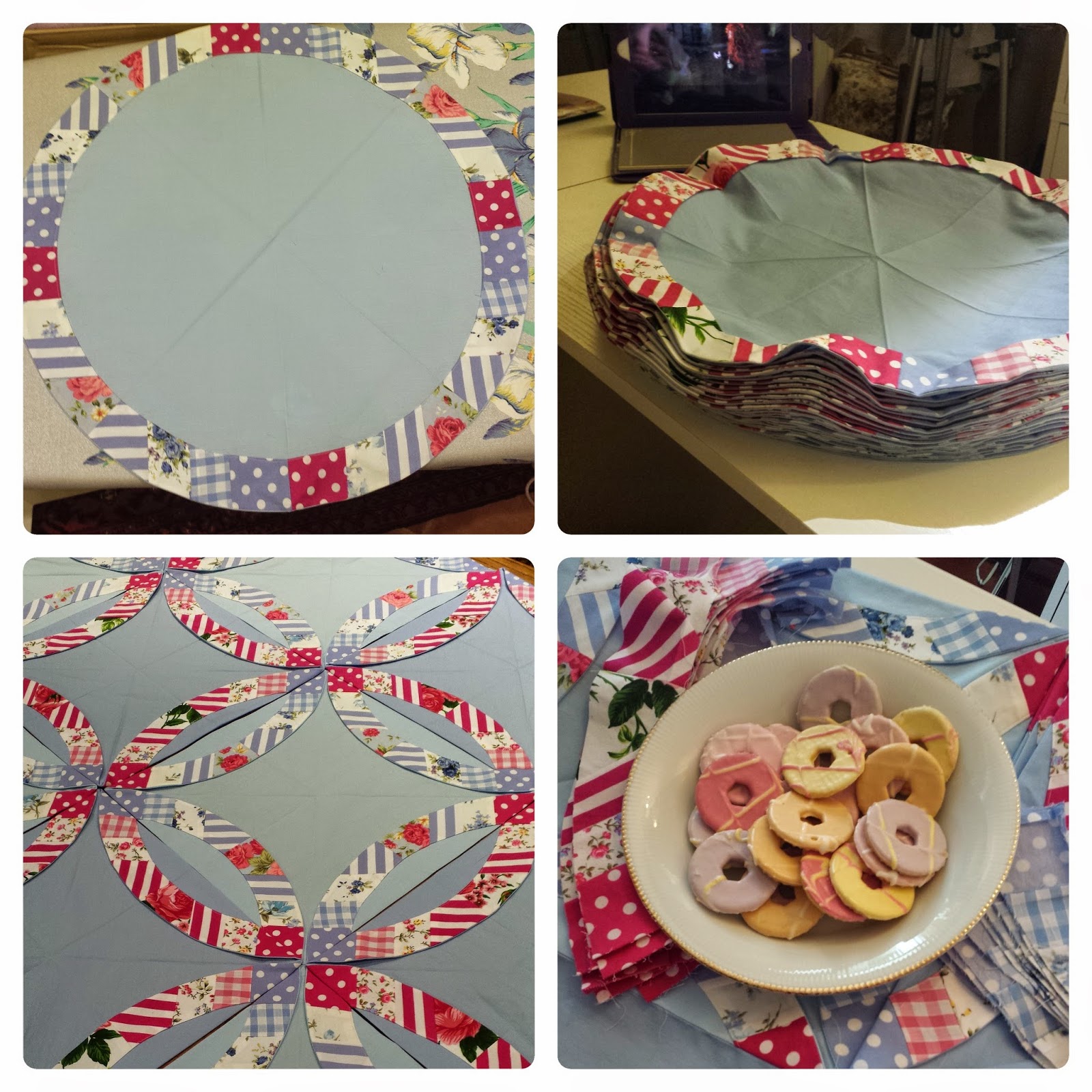 …..twenty five circles to be precise. I separated out individual jobs and did one a day so I didn’t get overloaded and it made the whole process very enjoyable. I decided on a lap size quilt which would end measuring 64 inches square, I picked that size to make it manageable although if you follow the tutorial (which I did to a point) you can quilt each individual block before you sew them together. I will totally do that for my next version (there will be another version…..for me!) but there was no way I could do the quilting on my Singer and I had time constraints so I powered through…..I did have party rings to help with that! The next stage was adding the scallops….. 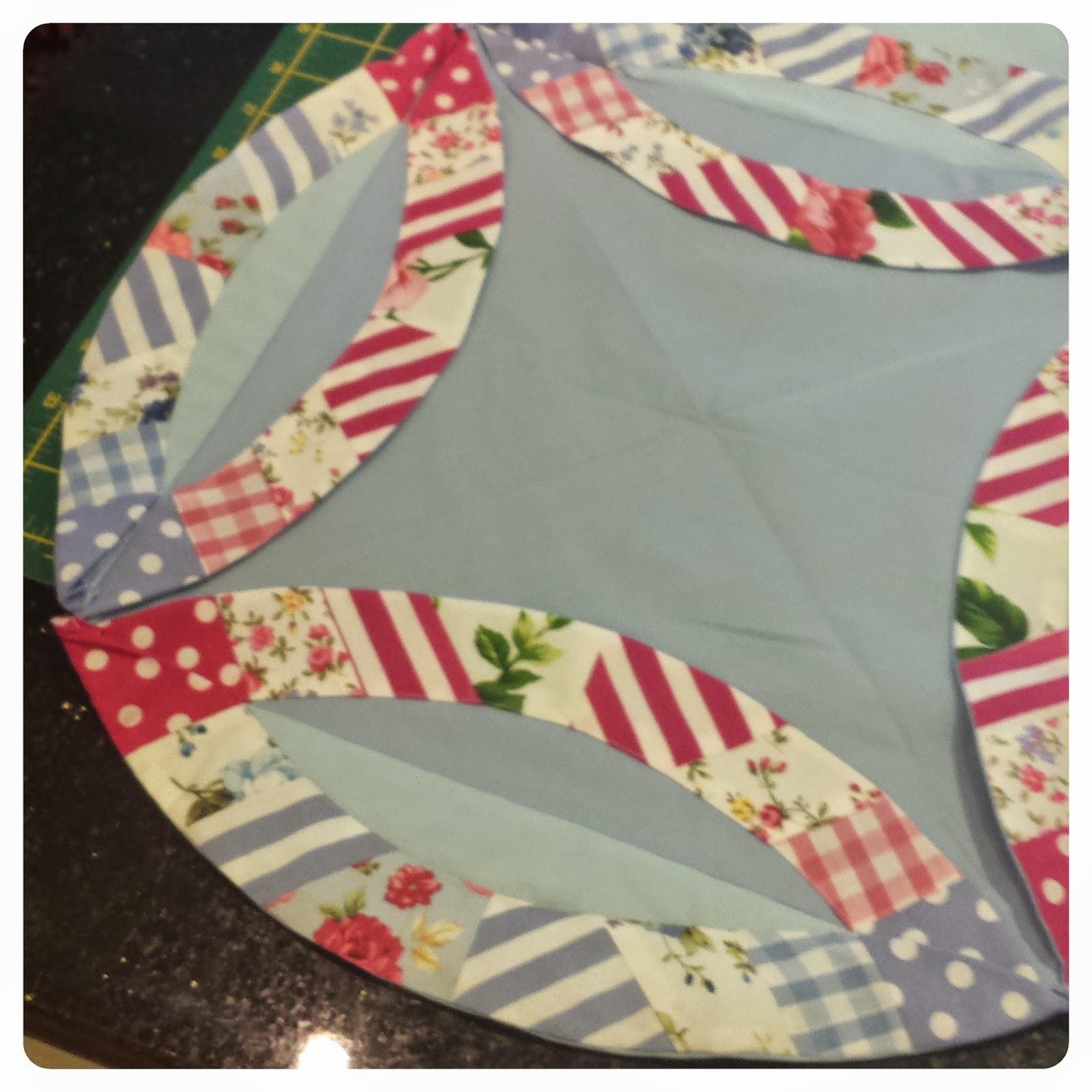 …..apparently it’s not a double wedding ring without a scalloped edge, who am I to argue. As you can see I’ve used two different shades of blue for the backgrounds this ending up being a happy accident, initially I didn’t order enough fabric and when I went to get some more the shop had run out so I picked up a darker shade and decide to go for a checker board effect. Once the scallops were all on I sewed all the blocks into rows and then added the rows to each other, I had a quilt! Well sort of, it still needed batting and actual quilting…. 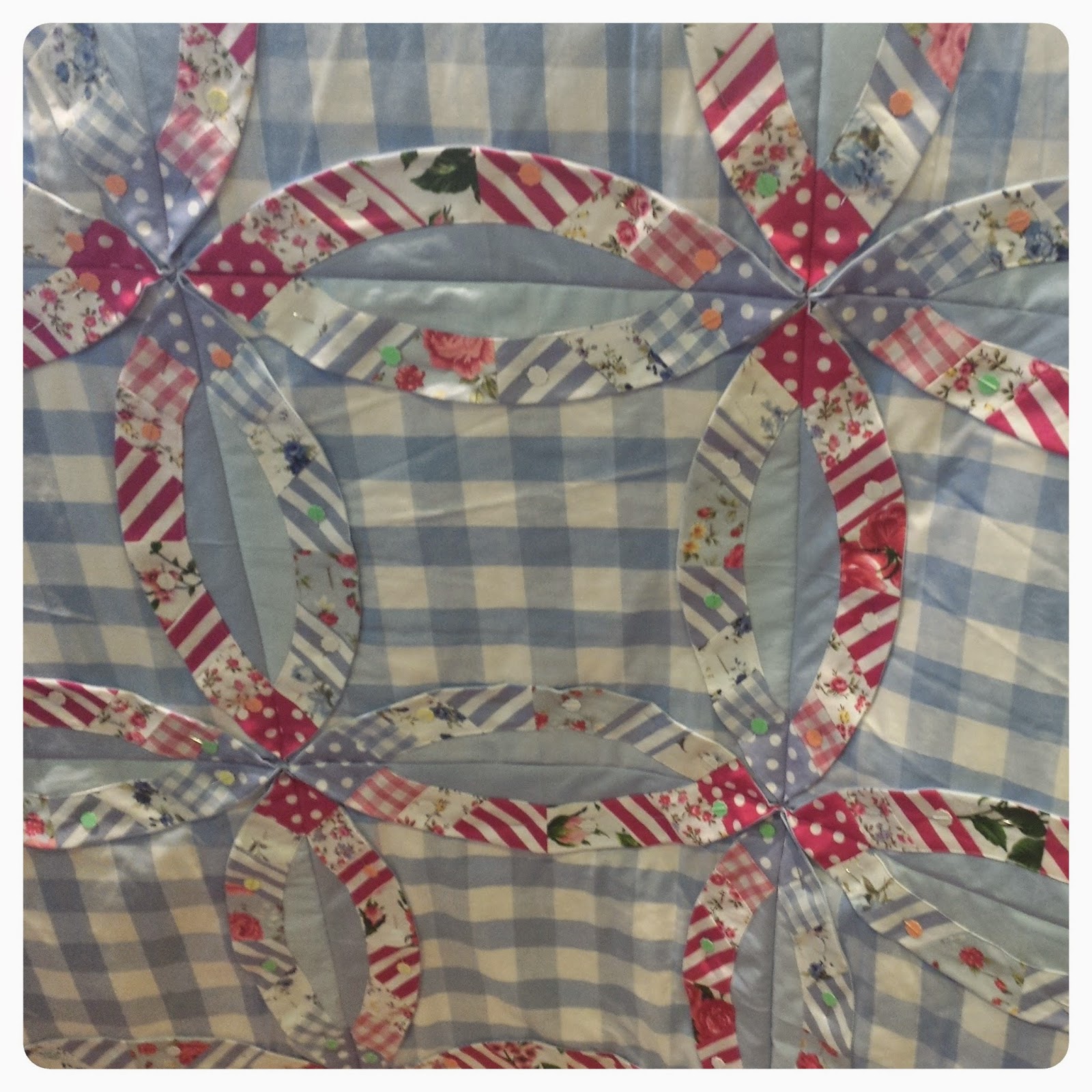 …..I picked this giant gingham as the final fabric which I think was a mistake as it makes the blue rings fade in to the background more than I would like but I can’t think what other fabric I could have picked. Once I had sewn all the arcs in to place I had reached that part I was worrying about….the quilting. I’ve never done free motion quilting before so of course I did some trail runs…. 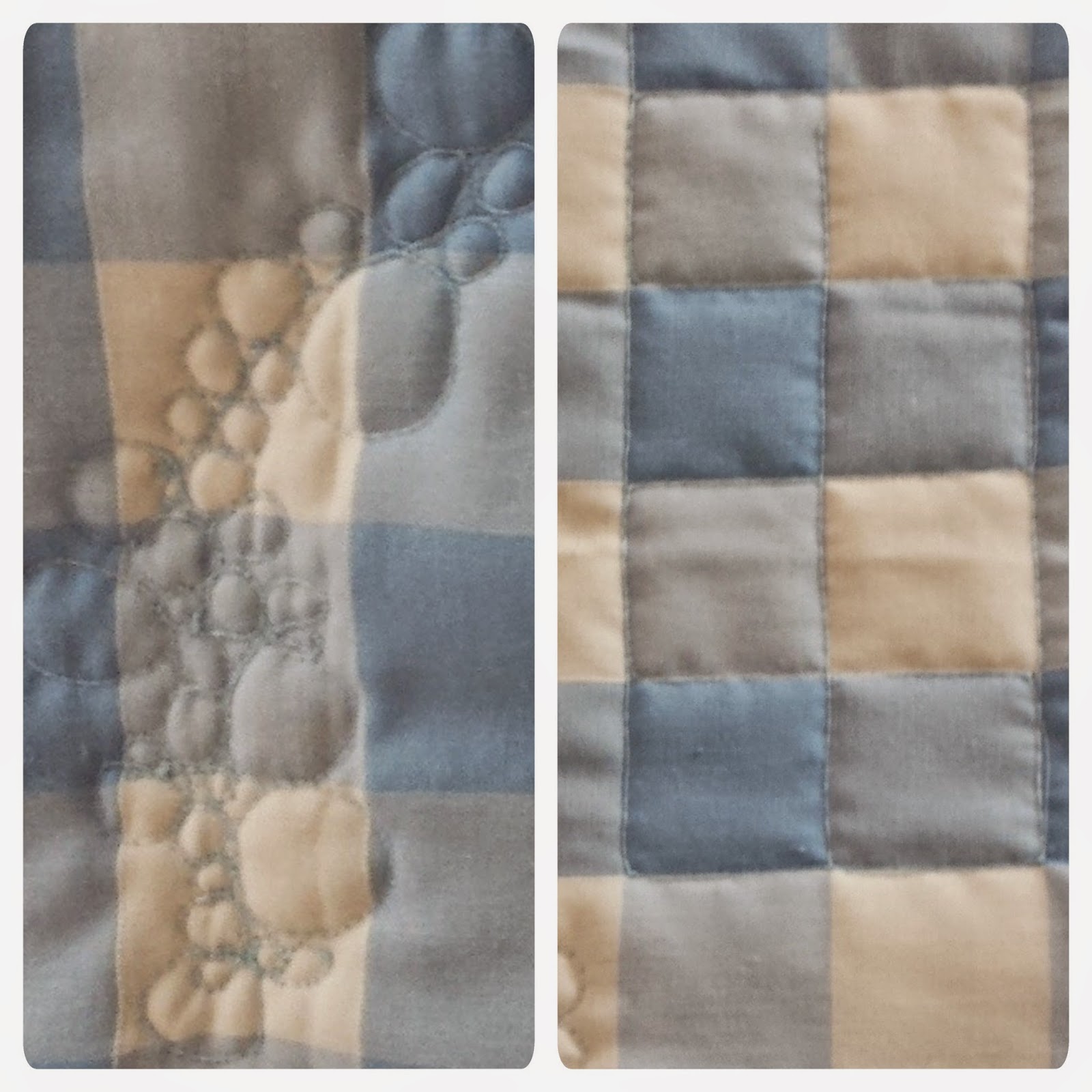 …..I really liked the pebbles but there was no way I had time to do that all over the quilt. Just following the squares looked cute but not quite right. At this point I had Mum on FaceTime trying to come up with something that was going to be right. The Rings That Bing book comes with quilting motifs and appliqué which are gorgeous but I knew I wouldn’t be able to manage those as I had the whole quilt to manoeuvre through my machine….. 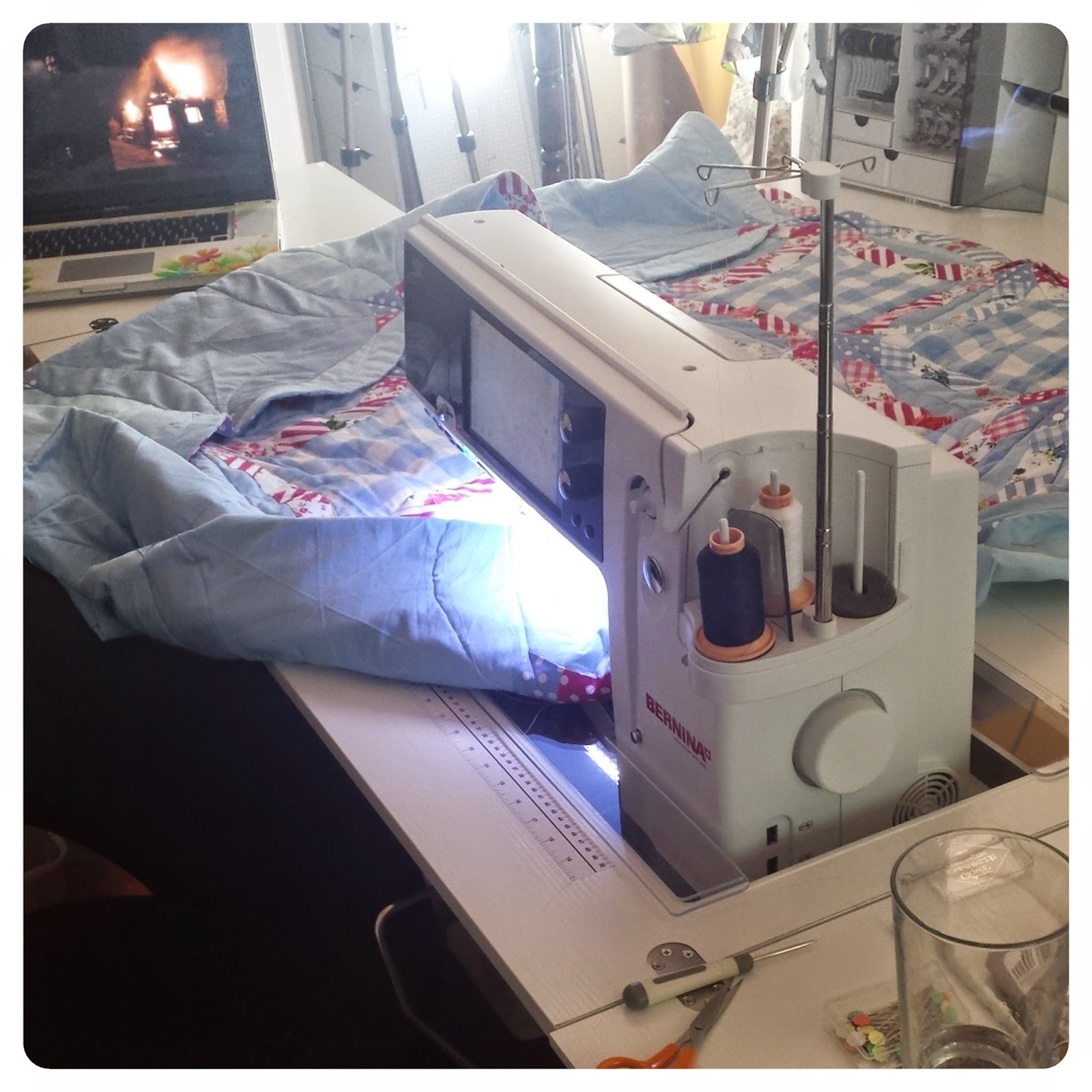 …..(note to self follow the instructions and quilt as you go!). One of the early stages was pressing each circle so there were guidelines to place the pieced circles on and we had an brainwave; follow the lines….. 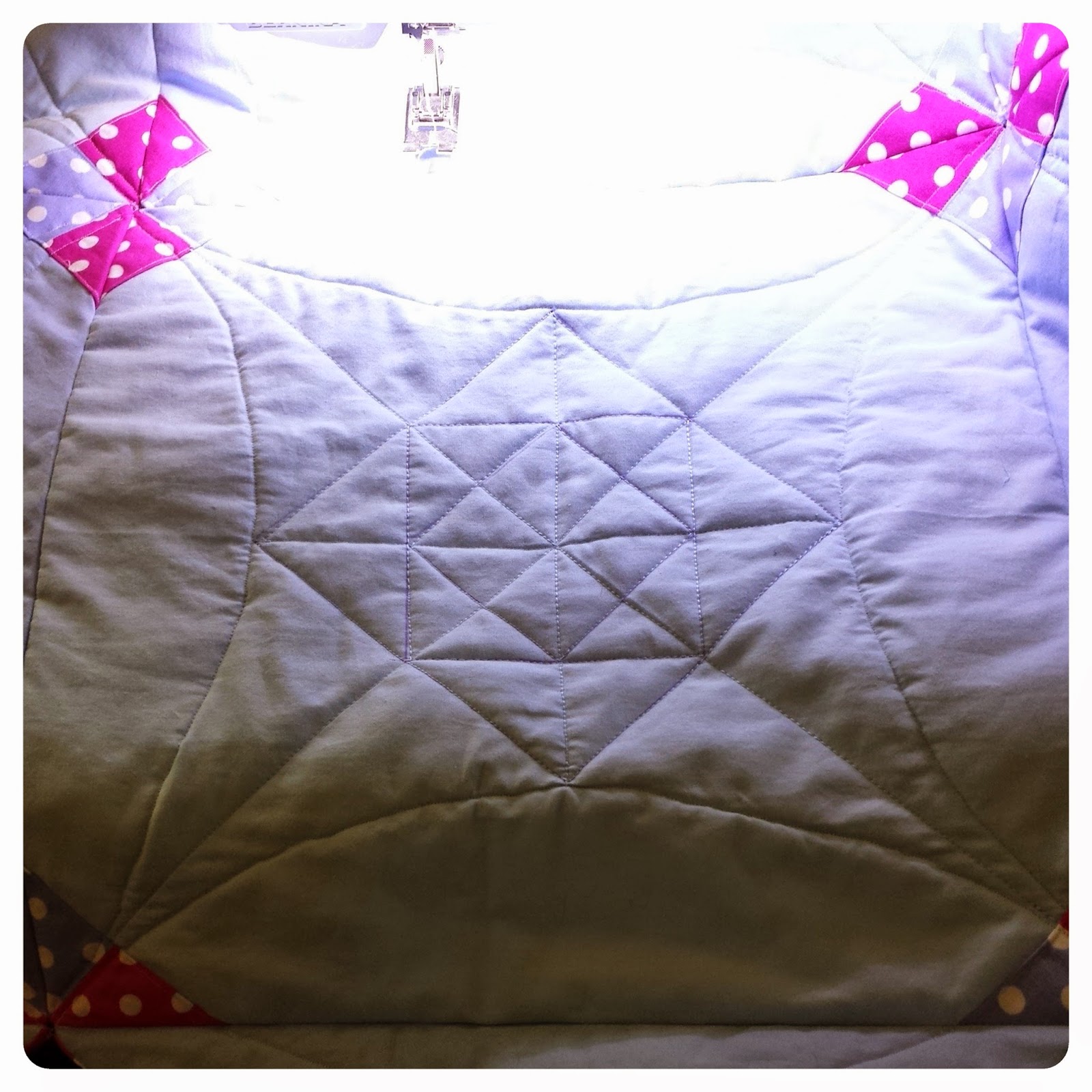 ….I then added the squares/diamonds. Very very simple but I really like it. Now I had a finished quilt….well except for the hand sewing….joy! The finishing touch had to be a personalised message for the birthday girl…. 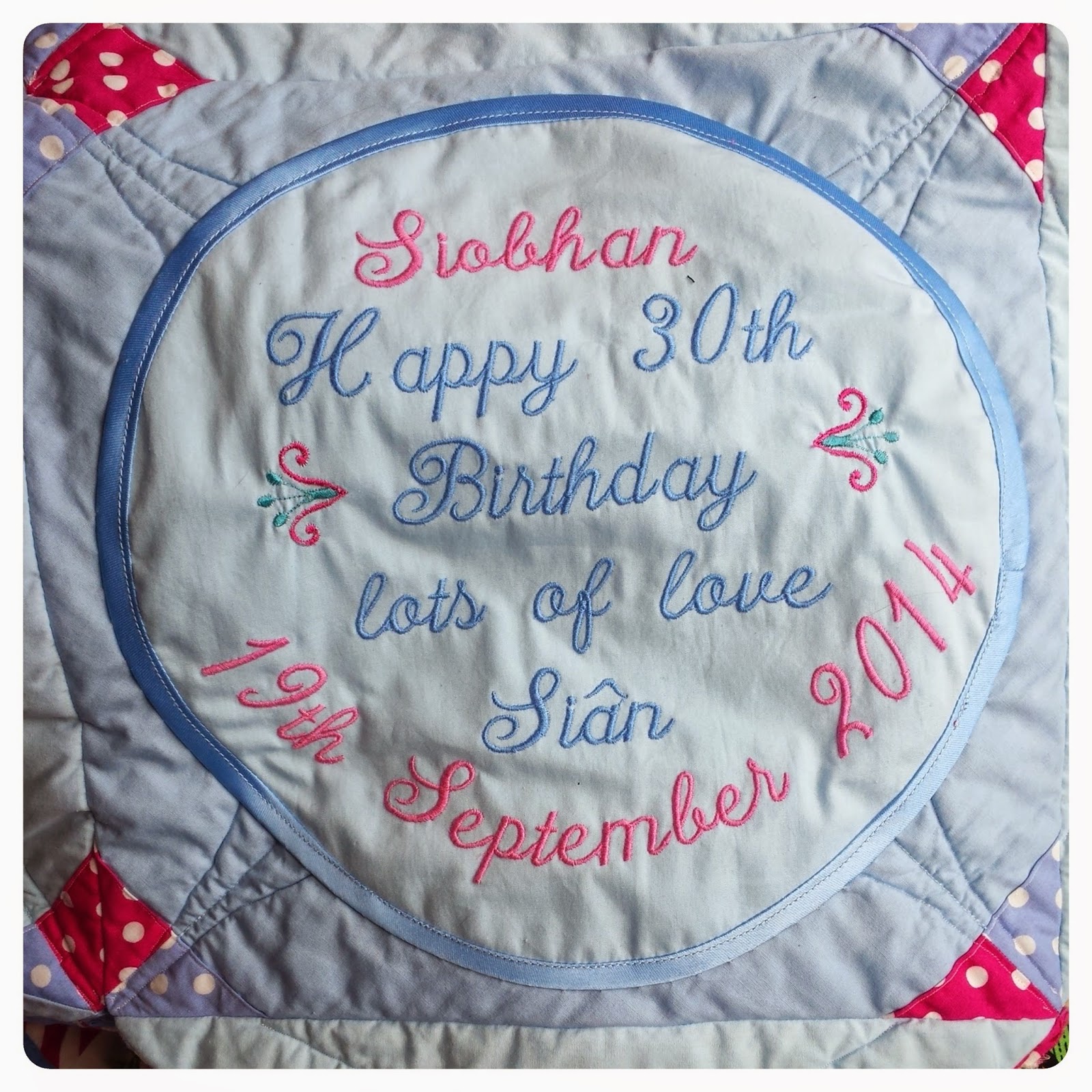 …….I hadn’t intended to make it quite so big but it fitted on the back of a block perfectly so I’m happy. So once the hand sewing was finished, each scallop had two pesky “ears” that needed to be stitched down (I ended up doing most of that on the train up to London….nothing like leaving it to the last minute hey?) I really did have a finished quilt…. 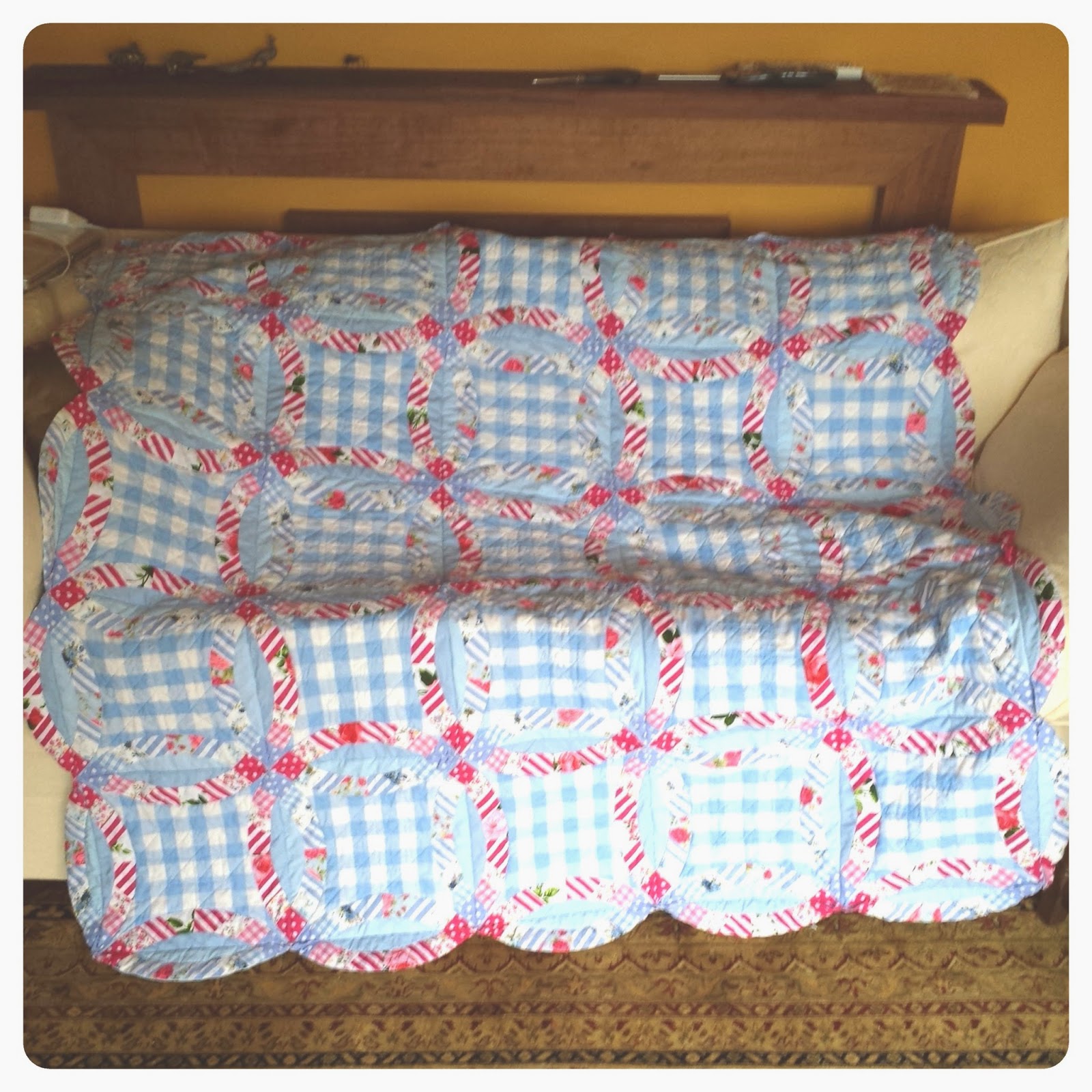 …..isn’t it beautiful? Attempting a Double Wedding Ring as my first quilt ever probably wasn’t my smartest move and it is most definitely not perfect but I’m so happy with it. Papa saw it and immediately said it reminded him of Dorothy so the Over The Rainbow quilt was named. Miss S loved it (I believe) and I’m so pleased that I got it finished for her birthday, there were a few doubts at one point.

If you’ve made it to the end of this picture/word heavy post well done, have a party ring, you’ve earned it!